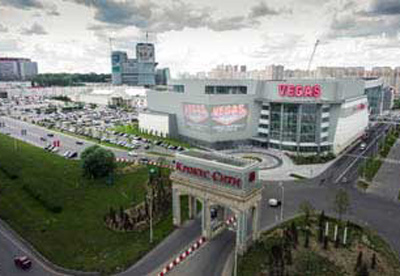 Moscow’s Crocus Expo Convention Centre recently added a 285,000sqm shopping and entertainment mall which is expected to help generate up to a million visitors to the complex each week, James Willsher reports.

The original Vegas – currently the largest shopping mall in Russia, at 480,000sqm – opened in November 2010 in southern Moscow at the intersection of the Moscow Ring Road and Kashirskoye Shosse.

The new development not only has an eye on the visitors the convention centre brings in and those from neighbouring Moscow districts, but also the new and expanding residential high-rise developments of Krasnogorye nearby, with its 1.5m sqm of new housing.

Vegas Crocus City was designed by KlingStubbins architects, and is the latest addition to the sprawling Crocus Group complex of three events pavilions and 49 conference halls on the outskirts of north-western Moscow.

The whole Crocus site, which also features a concert hall; business hotels; a yacht club; and 24-hour supermarkets, is served by Myakinino Metro Station, an overground train link from the Russian capital built and financed by privately-owned Crocus Group at the request of Moscow’s city authority.

Next year is expected to see the start of construction of Holiday Inn’s biggest hotel in Europe, with 1,000 rooms over a total of 81,082sqm; a new Marriott Hotel; and residential and business complex.

The new Marriott will have 1,550sqm of meeting space, featuring a 650sqm ballroom divisible by four, six flexible meeting rooms, and two boardrooms, while the Holiday Inn includes 2,500sqm of meeting facilities.