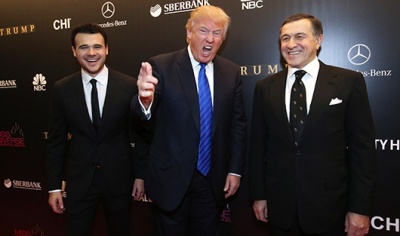 The Agalarovs father and son told Forbes how Crocus City would benefit fr om Miss Universe and why Donald Trump had agreed to hold the contest in Moscow.

November 9 Miss Universe contest was first held in Russia at Crocus City Hall. Forbes talked to Crocus owner Aras Agalarov (No. 56 by Forbes rating, $1.8 billion worth) and his son Emin about benefits they were looking for in this image-building project, event budget and new transactions with Donald Trump, owner of the Contest (Trump Organization President, No. 134 by Forbes rating of the most wealth Americans, worth $3.5 billion.)

Forbes: Why does Crocus City Hall need this event?

Aras Agalarov: We are thinking not only in terms of Crocus City Hall, rather in terms of Crocus City in general (Moscow’s trade, exhibition and business center – Forbes). We are seeking to position Crocus City on a world scale as we have been and will further be holding international events here, such as exhibitions, forums and conferences. Miss Universe is one more evidence that Crocus is certified to hold such events. As for concert business, Emin knows better than I do.

Emin Agalarov: When managers plan actor’s tour, they sel ect those venues wh ere they think their actor fits best. Every large city has its best-known venue, such as Madison Square Garden (New York’s largest arena – Forbes) or the Royal Albert Hall (London’s top rated concert hall – Forbes). Now, Crocus City Hall is put on the map of Russia as its top-rated concert arena best-fit for any high-rating actor.
Thus, we get such actor for only one third of his or her remuneration and we do not have to lure him or her for unbelievable amount of money as it usually happens. We will move the concert bar upwards (now Crocus City Hall is holding about 270 concerts annually.) We are planning to invite not only Russia’s top stars loved and respect by the Russian public. We also seek to add such names as Sade or Elton John based on consistent economy. This is the key objective of Crocus City Hall.
We believe that holding such event at our venue is a good thing to do. Aras Iskanderovich was right to say that this will boost our exhibition and hotel business. We will have three hotels available at our premises of total 1,500 rooms. We operate a 480,000 square meters trade center. Thus, we find such projects to be feasible and profitable.

Forbes: Do you plan any joint projects with Donald Trump, may be construction ones?

А. А.: We discussed our joint projects right before our interview. We have just shared our views on such projects and he said they were quite interesting.
E. А.: We will complete one project and then go down to the next one. We may theoretically consider a possibility of building a Trump Tower as one of our sky-scrapers.

Forbes: How did you manage to talk Donald Trump into holding Miss Universe here?

E. А.: We did not have to talk him into such thing. We just had a meeting, talked with Aras Iskenderovich, we all seemed to like each other, shook hands and signed our contract within a week’s time. It took much more efforts from the two teams - Crocus and Miss Universe owned by Trump – how to do this in terms of organization and finance.

Forbes: You mentioned $20 million as contest budget. How did you distribute this amount?

E.А.: License fees took one third of the amount, one third went to cover all organization costs and one third was sent on sets, production, live air and high definition mobile television units which we do not have in place here and have to import them from England. It will be the first time we have a 3-mm distance between pixels, which allows us to air HD picture. Lighting engineers and the production team are the same people who air Grammy and Oscar ceremonies.

Forbes: Have you contacted any other foreign companies or made any arrangements on any events of the Miss Universe level?

А. А.: If you look at our event schedule, you will see that the medical forum was completed only yesterday. It was a global forum. In September, we are going to host an automobile exhibition, which ranks among five world’s largest motor shows. We are also going to hold a large furniture exhibition related to construction sector. We are holding over 250 exhibitions, and about 200 on the international scale. Miss Universe is the largest and most rated event on this schedule.
E.А.: Its target segment is much broader. That is, other events are specific and industry-related.

А.А.: There are only ten global events of the Miss Universe level.

E.А.: They include the Olympics, Formula-1, FIFA World Cup, Eurovision, Oscar, Grammy and Miss Universe… Its rating may compete with the Olympics.

Forbes: What about Miss World?

E.А.: There is no beauty contest which could even approach Miss Universe by the number of viewers. One billion viewers watch it live and about 2.5 billion in total in 175 countries airing the contest. The Olympics is the only show, which attracts more viewers.

Forbes: Do I understand correctly that the project started from your video featuring Miss Universe 2012?

E. А.: All things start in a very simple way. Miss Universe appeared in my Amor video. Then we met with her managers, they came to Russia and met with Aras Iskenderovich. Then we all met with Donald Trump and shook hands. It took just a few months to bring Miss Universe to Crocus City Hall.

Forbes: Are you going to make a new video with a new Miss Universe?

E.А.: Are just back fr om our video shooting (the interview was taken on November 9 – Forbes.) A new video features all contest participants and Donald Trump. It will be released next week.

For more details go to Forbes.ru