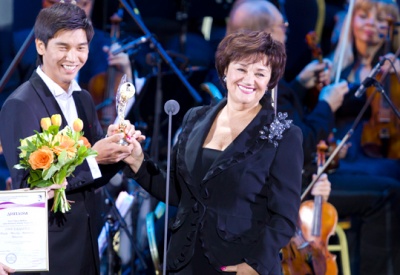 Magomayev International Singers’ Contest was founded in 2010 as a unique pageant where contestants sing classic pop songs along with opera arias. It is a great challenge for young singers to have their talents exposed in front of the professional jury chaired by Tamara Sinyavskaya, People's Artist of the USSR. High-level requirements at the contest are set by the unique talent of Muslim Magomayev, a top-rated Soviet singer. This only adds value to the awards received by the winners.
This year, we are proud to present a unique concert featuring winners of the 2010 and 2012 contests:

The program will feature various genres and composers, such as Wagner, Giacomo Puccini, Donizetti, Kalman, Tchaikovsky, Verdi, Pakhmutova, Babadjanyan, Sviridov, Magomayev, Valente and much more.
The tribute to one the best singers of the Soviet Union is a magnificent journey into the world of entrancing music and outstanding voices.