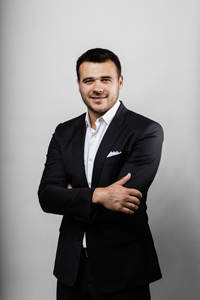 Emin Arasovich Agalarov was born December 12, 1979, in Baku, Azerbaijan. He and his parents moved to Moscow when Emin was four years old.

After finishing high school in Switzerland, Emin enrolled in Marymount Manhattan College (New York.) He graduated at the top of his class, delivering a thesis on “Business Management in the Field of Finance.”


As part of his responsibilities, Emin Agalarov oversees the following ventures:

∙ The VEGAS chain of retail-entertainment complexes. At present there are two locations – VEGAS Kashirskoe Shosse (480,000 m2) and VEGAS Crocus City (285,000 m2) – with a third location, VEGAS Kuntsevo, slated to open in 2017;

∙ The restaurant portfolio of Restaurants by Crocus Group, which includes the chain of the legendary Nobu restaurants; the Zafferano franchise, dedicated to modern Azerbaijani cuisine; the Edoko franchise of Japanese of sushi-bars; the Rose Bar franchise; Forte Bello, serving up the finest in family-style Italian cooking; and Backstage;

In addition to his business activities, Emin Agalarov is also an accomplished entertainer, who performs under the stage name “Emin.” He has released eight solo albums, in both English and Russian. His songs are played in heavy rotation on Russian and international radiostations alike, and he performs concerts all over the world.

- In 2012, he performed as a special guest on the Eurovision Song Contest;
- In 2014, he was recognized by the World Music Awards as the Best Performer from Azerbaijan;
- In 2014, he was awarded Russia’s Golden Gramophone for the song Ya luchshe vsekh zhivu (“I Live Better Than Everyone”);
- In 2015, he was recognized with a RU.TV Award for Duet of the Year for the song Smotrish v nebo (“Look at the Sky”), a duet with Svetlana Loboda.

Emin Agalarov is single, and has two children.