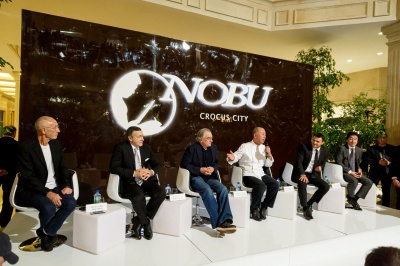 Yesterday, November 9, marked the official opening ceremony for the new restaurant, Nobu Crocus City, at Crocus City Mall. The occasion was feted with all the stops, including a grand red carpet, exquisite dishes prepared by Nobu chefs from around the world, a “kagami biryaki” (a ritual breaking of a saké barrel), and, of course, personal appearances by the owners of the Nobu chain, renowned actor Robert De Niro and master chef Nobu Matsuhisa.

“I think this is a truly significant event for Moscow. A brand like Nobu is a boon for any world capital. It is always a challenge to open a restaurant of this caliber, which holds the highest standards for design, food, and, really, all the other components of the restaurant business. It is a tremendous achievement that we were able to meet or exceed our partners’ expectations for the second time,” Aras Agalarov said.

As for the question, “Why open the restaurant here in Crocus City?”, Emin Agalarov answered:

“This is one of the most promising ventures in the country when it comes to luxury retail. Almost every year we launch new projects. Next year, we are planning to open a children’s theme park, similar to Sega Park in the Dubai Mall, as well as an oceanarium and the concert venue, Vegas City Hall. Each of these projects brings more clientele to Crocus City Mall, and, as follows, to Nobu.”

Following the press conference was a traditional opening ceremony, complete with Japanese drummers and a “kagami biryaki,” the ritual breaking of a saké barrel that the owners and participated in. Under the flash of cameras and celebratory whoops, the barrel was broken, and the saké was poured for all of the guests to enjoy.

The evening was attended by the entire capital, as well as many international guests, including Goran Bregović and glamorous singer Toni Braxton, who arrived immediately after performing a concert at Crocus City Hall and signing a star on the Alley of Fame at VEGAS. Among the other honored guests were the designers Giuseppe Santoni and Tony Ward, who opened boutiques at Crocus City Mall earlier that day, as well as Italo Fontana, on hand to present the latest model of U-Boat luxury watch.

The new restaurant Nobu Crocus City comprises a total area of 1,200 square meters over two floors, with three entrances: one from the street, one from Crocus City Mall, and one from VEGAS Crocus City. The first floor features a bar and a lounge zone, the main dining room with seats for 70, and a sushi-bar. The second floor offers a hall with a panoramic view, a separate VIP room and a large banquet hall, capable of seating 120.

The kitchen at Nobu Crocus City is headed up by French chef Damien Duviau, together with an international team, including Japanese sushi chef Sohta Fujimori and United Arab Emirates pastry chef Stewart Bell, all of whom have honed their skills in other locations within the Nobu empire.

The founding of Nobu’s global empire started 22 years ago in New York with the famous American actor Robert De Niro and master-chef Nobu Matsuhisa, a man known for reinventing Japanese cuisine. Since that moment, the exquisite offerings from Nobu have tantalized many a Hollywood star, celebrity, high society and the power elites alike. The Nobu empire currently boasts 32 restaurants in 28 cities around the world. Wherever a new Nobu appears, it becomes the center of attraction.